Last month some time, someone on Facebook mentioned about doing some kind of “random acts of kindness challenge”, for the month of December. I don’t remember what it was or who suggested it. There was a mention of reporting in with what everyone had done, and I do know that I said maybe we should keep it a secret until it was all done. I’ve searched for it. Naturally, I couldn’t find it again. December started. I don’t know if anyone else is doing it. On the first of the month, I realized I could just do my own thing.

I decided to try to do one kind thing for someone each day. Anything. A small thing. Preferably for someone I don’t know, but it’s OK if it’s not a stranger. It’s my own little thing.  I figured I could make up my own rules. The one thing that’s not OK, for now anyway, is to talk about it. I’m talking about it in general terms now, because I would love to have some people join me. But I’m not going to talk specifics. I thought about it and realized that detailing what we have done could turn it in to a contest.

Last year in November, I participated in a planking challenge. I was going through a rough patch and I desperately needed a distraction. In addition to completing the required number of seconds for my plank, I came up with interesting locations to perform it. It fed my competitive nature to try to come up with something new and different every day. I had some good laughs, planking on my son’s teacher’s desk, (Thanks Susan!),  and in various spots around town.  In spite of all the fun, I still got the physical benefit of the challenge. The antics did not take away the whole point, which was to develop my core strength. 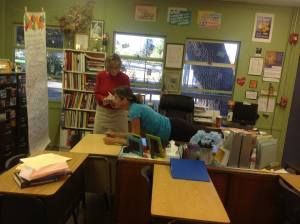 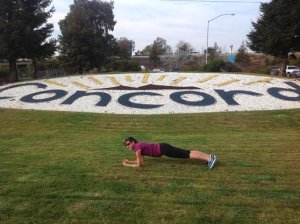 But with this new challenge, it could then become about who came up with the most creative thing. The real meaning would be lost. The real meaning is to help someone. To make someone’s day. To make someone smile. To perhaps instill in them the idea to do the same. As corny as it sounds, it’s about making the world a little bit better. It should come from the heart, not because we want to brag about what we have done. If the motivation comes from the heart, the act itself is the reward.

That’s not to say we can’t talk about later, sometime in 2015, because we could give each other ideas going forward. But the beauty of it now is just to do some beautiful things.

I’m going to try to keep it up through December. Perhaps you could too. Or pick the next 30 days. Or longer. But I think it’s always nice to start small and develop habits. I’m hoping this will become a habit for me.

Will you join me?

And please note, I did a whole blog post without mentioning running  even once. That’s because I did 14 miles today and I’m too tired. 🙂