In some ways, it has flown by. It’s been a year now since I had my transplant. The day we call day zero was August 19, 2014.  Last year, I arrived at the hospital on the 15th, had chemo for two days, then a day of rest. The 19th was the day my cells were returned to me, and sparked the beginning of what we hope is a brand new healthier immune system.

I could only think of one way to celebrate.

I made the trek to Stanford to visit my old hangout, the E1 unit. My friends Kerry and Jan, both of whom had visited me there last summer, came along.

I was a little nervous at first, because I didn’t want to be in the way. That fear lasted about 2 seconds. As soon as I got there, a crowd gathered around. It was the nurses’ idea to get a picture, so we posed. They remembered me… “You were in 124!”. Yep!

I had a bag of goodies which included some cookies for the nurses. In addition, I tried to think of things the patients might like. One of my favorite things I had while there was the soft blanket that friends Gina and Fatma had given me, so I brought a couple of those I had purchased, along with some colorful scarves. I washed some of my hats and brought those too. They have a basket where patients can choose hats to wear. I took a few of the chicken photos from last year and made some cards for the patients too. I received so much last year and it felt good to be on the giving end for once.

I asked if any of the patients might want a visitor and they had someone in mind. I spent some time with Theresa, who had been there six months! She was dealing with “GVHD” which is Graft vs Host Disease. This is a potential complication of an “allogenic” transplant, the type where a donor’s cells are used. (I had an autologous one, with my own cells)

Theresa told me she had an almost 2 year old son at home and I felt like my heart was going to break for her. I cannot imagine what that must be like. We talked for a while in her room, after she did a few laps around the unit. She hoped to be home for his birthday at the end of the month. In spite of her rough road, she had the most beautiful smile, especially when talking about her son. I have been thinking of Theresa each day since. If you are the praying type, please say one for her.

The drive back in commute traffic made for a long day, especially after parting ways with Jan and then Kerry. But it was one of those days I realized I would not have wanted to be anywhere else. It just seemed right.

I have had a terrific year. Good by any standards, not just for someone recovering from a stem cell transplant. I am not sure why I am so blessed, but it has made me grateful for every day. I think there is more I’m supposed to do with my life. I’m excited to see what the next year brings, one day at a time. 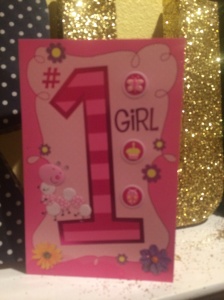 And yes, Erin did this to mark my first re-birthday!