(And you thought my French classes were being wasted)

So, I spent a good chunk of last week as a patient advocate for my rare disease. It felt good to contribute and it was a good distraction. I needed one. Because I always get really nervous the week before I run a marathon!

I had tried to keep quiet about it, only posting a few times on Facebook about my long runs, without mentioning what I was training for.  That would be because by this point in time, I had been feeling like there was some sort of jinx on me. My quest to run another marathon, this would be number 9, had been going on for 2 years.  I wrote about the highlights in my post in November, titled, “Driven.”

After sweating out every ache and pain, worrying about getting sick on the plane, and just making myself slightly crazier than I already am, I did actually make it to the start line in Sunday morning in the beautiful town of Calistoga. I ran, and so as not to keep you in suspense, finished the Napa Valley Marathon. Yes, 26.2 miles.

I can truly say it took a village. My husband, Howard, once again put up with my long training runs, even accompanying me on the bike to provide support. My coach, Andy, guided me through a well thought out training schedule and made sure I knew that he believed in my ability.   My friends cheered me on. One in particular, Erin, provided the backdrop for the weekend, reserving an amazing place for us to stay and enjoy the whole weekend. And my kids….well, it was, “Where are you going now, Mom?”, when I left for the weekend. I don’t think my race was on their radar screen, and that’s OK! 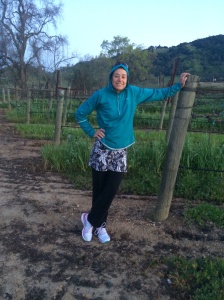 It was a tad chilly at the start as I contemplated removing my pull over and long pants. The start line was surrounded by vineyards, as was much of the course. Beautiful! 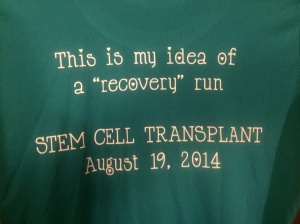 But I had to get down to a single layer. I figured I could use the extra encouragement that my shirt would provide. ( And it did… 59 times… hey, I had lots of time to count.) 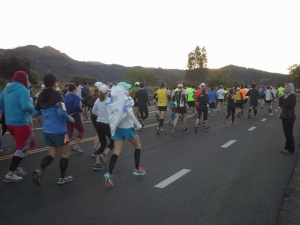 And we were off!  Sandwiched between two days of overcast, Sunday was a beautiful day! The sun was just rising and for a while it was blinding us as we headed down  Silverado Trail. I really only had one thing on my mind, though, and that was 9 minute miles. I began the race with the thought that running for four hours plus is a long time, but put in perspective: four hours is small amount of time compared to all of the hours of training. And if four hours was all that was between me and my goal, I could do it. I made the decision. The course was a little more ‘rolly’ than I had anticipated, but for the first 8 or so, I maintained a sub 9 pace. I could tell I was slowing as we got into the middle miles. As I crossed the one timing mat on the course, at 13.1, I was still very much in the game, at right about two hours. My goal? A 4:10. I wanted it very badly. I stayed on track, even as my pace slowed to around 9:30. If I didn’t slow too much, and could maintain a 10 minute pace through the last 10K, I could do it. I had committed to it, but there just are not any guarantees in 26.2 miles.  It wasn’t to be. It’s as if a light switch was flipped at about 19 and I couldn’t push anymore. My 4:10 turned into a very long 4:41. I knew there were people waiting at the finish that were probably starting to worry. But it wasn’t a choice at that point in time. I simply didn’t have it in me that day.

I could say it was heartbreaking, but it wasn’t. Heartbreaking was last year, when I was training far better than this cycle and I didn’t get to run because of my injured hamstring. In spite of how disappointed I was, and how much I had wanted that 4:10 to qualify for Boston, at least I had gotten to try! I failed in one sense, but I am incredibly grateful to be able to cover this distance just 6 months and 10 days after my transplant.

Any way I look at it, it’s a PT PR. ( Post transplant personal record) Not that I want to use any excuses for not achieving my goal! I  will work hard and I will try again.  But if I gave one person hope for what is possible after an SCT, then each of the 281 minutes and 10 seconds was worth it.

I love this guy, he’s always proud of me.

Thanks for waiting, everyone! 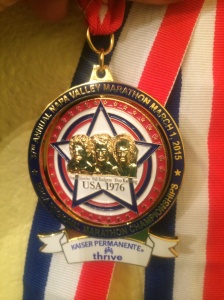 Yeh, this one means a lot to me.