It’s been a while since my last post. I started a new one last week. It’s a curse being as technologically illiterate as I am. I can’t get my phone to send photos now. By the time I finally managed to get an image from my phone to my iPad, my blog post of 500 words had disappeared. I got a little mad at wordpress and it has taken all week for me to get over it. 🙂

I’ve had some time now to analyze that marathon I ran last month and for once, my talent of over thinking things may have paid off. I’ve come to some conclusions about how I might have done better. I’m not sure I was quite ready to run my goal that day. I do know, I could have done better.

During my long training runs, I developed a little habit. It didn’t happen every time, but often enough to interfere with developing the mental toughness I needed for 26.2 miles. Some times, I just stopped. I stopped and thought for a moment. “I don’t want to run anymore.” “I need a break”. “I’m not having fun”. “This is awful.” “This isn’t race day, I don’t really have to do this today.” I would force myself to get started again, and sometimes I could regain my normal pace, but the damage was done. I was giving into feelings that I wouldn’t have time to feel during a race.

Looking back, I think I know where this mindset was created. When I first started running after the transplant, it was really hard. I had posted here that I knew I needed to be nice to myself. I tried to stay positive and not beat myself up, because I was really slow and it would have been easy to give up. That was a good way to be at the time. Then I came back. I started running more like I used to. I started seriously training again. And I needed a little meanness back. Sometimes, you have to push yourself. And you can’t always be nice and forgiving. Sometimes the Kim who wants to achieve things has to yell at the Kim who wants to take it easy.

I’ve talked to my coach about this. It’s about figuring out what I want and why I’m out there,  about being prepared to answer back with the right answer when your body and mind are questioning what you are doing.

So, for the last several weeks, I have been answering the question, whatever it may be, with “Hell yeah, I want this!” There has not been any stopping, other than for a traffic light, or to retie my shoe. I’ve been focused and driven. It may still take time to get to where I need to be. I have two upcoming races and I can’t honestly say I will be exactly where I need to be. If I am not there, however, it won’t be because I stopped on the trail and had to talk myself into running again. 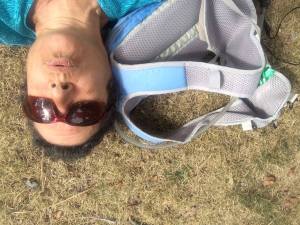 (Above: Recovering after completing a 13 mile run at Lake Tahoe, 6200 ft of elevation, where I did not give in to those wimpy feelings even with a 300 ft climb in the last mile)

In other news, because this blog started as a way for me to balance my medical adventures with the rest of my life, I have an update. It’s my hope this is nothing more than a little blip on the radar, but I have another bone marrow biopsy coming up. I had what I was hoping was a routine check up with my oncologist last week, where he would throw me out of the office, saying, “Don’t come back for three months!” But that wasn’t the case. We discussed the fact that lab values indicating the protein being leaked from my kidneys is at an all time high. This doesn’t indicate that I’m not in remission anymore, but he does want to pursue some more testing to see where we are. I have an appointment to see my nephrologist, that’s the kidney specialist, on the 29th. And that bone marrow biopsy, that’s Tuesday the 14th. Not my favorite procedure, but it’s what I signed up for when I picked this disease. Silly me.

I am confident all will be well. But if it’s not, I’ll deal with whatever comes. There is an opportunity for good in everything. If it’s another opportunity to develop mental toughness, then I’ll just have to take that and run with it. Literally. 🙂